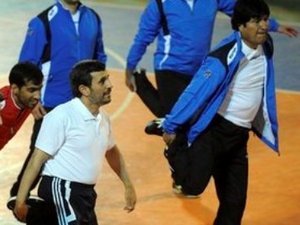 Iran's President Mahmoud Ahmadinejad was on striking form when he met his Bolivian counterpart Evo Morales on Wednesday -- on the football pitch for a friendly with top Iranian players, local media said.

The Iranian and Bolivian leaders, sporting T-shirts and shorts, played in the same team alongside Iran's star midfielder Karim Bagheri, with both scoring in a match that was drawn 4-4 at the end of normal time.

Morales, who is a close ally of the hardline Iranian president, arrived in Tehran on Sunday night for a three-day visit aimed at bolstering economic ties between the two countries and securing Iranian investment in Bolivia.

It is his second visit to Iran in as many years, while Ahmadinejad traveled to Bolivia in 2007 for the first visit by an Iranian president.

Under Ahmadinejad, the Islamic republic has strengthened diplomatic ties with Latin America, and with Brazil, Nicaragua and Venezuela in particular.

Venezuela's President Hugo Chavez visited Tehran last week, while the Brazilian football team took on Iran in an international football friendly in Abu Dhabi on October 7, in which they cruised to a 3-0 victory.(AFP)