Russia: France Fighting in Mali Rebels It Armed in Libya 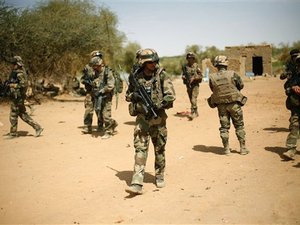 The rebels France is battling in northern Mali are some of the very same fighters it helped arm in Libya, Russia's Foreign Minister Sergei Lavrov said Sunday.

"In Mali, France is fighting against those it armed in Libya against (Moammar) Gadhafi's regime in violation of the U.N. Security Council (arms) embargo," Lavrov said in extracts of a television interview published by Russian news agencies.

Lavrov has previously criticized French arms drops to rebels fighting Gadhafi's regime, denouncing France's interpretations of a U.N. resolution allowing the use of force to protect the civilian population.

He also claimed that other veterans of the Libyan civil war are now fighting in Syria against the regime of President Bashar Assad.

"I'm baffled by our partners' inability" to see the bigger picture, he added.

Russia, a permanent member of the U.N. Security Council, abstained from a March 2011 vote allowing international strikes against Gadhafi's forces, leading to the fall of his regime.

Moscow has frequently said the NATO response in Libya exceeded the resolution.

France last month intervened in Mali at the request of Bamako authorities after Islamists rebels began advancing southward towards the capital.

The rebels had taken over the north of the country following a March 2012 coup in Bamako and the region had become a haven for Al-Qaida in the Islamic Maghreb.

What a lying little girl, those Mali Islamists are the ones Gaddafi brought in and armed with his RUSSIAN bought weapons to try to save his regime.

eltigar:
Regardless whether you like Russia or not, what you read IS the truth, they are indeed fighting the ones they armed, this also goes for the double standards on Syria, mali "rebels" are terrorists while syria's head chopping throat cutting "rebels" are "freedom fighters" in the end its a lose lose no win scenario, so please spare us of your hatred comments the only one barking here throughout history has been the all out mafia driven - corruption pit of a hell whole the devil is ashamed to call home - Lebanon - from which its citizens and the governments they elected throughout history have accomplished nothing other than blaming left-right up-down and middles while self promoting themselves to sainthood.

Sergei Lavrov has it exactly correct. The ousting of Gadhafy also freed up huge amounts of domestic military arms as well.

These arms are not only showing up in Syria but in the Sinai as well as they are dispersed by Islamists throughout the middle east.

The arms seized in the Sinai by Egypt included sophisticated surface to air missiles as well as accurate ground missiles.

The primary reason for the assassination of Amabssador J. Christopher Stevens was probably anger over delays of shipments of surface to air missiles to Al Nusra in Syria.

It is becoming ever so clear that Saudi Arabia, with the help of Zionists, are trying to destabilize just about every country in MENA.

Russians just mad they are not buying their weapons, though I agree what they said is totally true.

FT... I can't agree with this one. The U.S. marines were not invading and uninvited. They were invited in 56 by Presidant Chamoun to help against the Nassar inspired "Arab" revolution. Then they were invited in by presidant Gemayel to help in the aftermath of the Israeli invasion. The US Marines, French and British all deployed to help reinstate Lebanese state authority and pressured the Israeli withdrawal! At the time it was against communists and Israeli fascism. Unfortunately the rare gesture of good will was seen as weakness and another front for the Islamic republic of iranian's war and revenge for what happened in Iran!

Again Lebanon was the chess board!

Still though, it has nothing to do with this and a Sunni fanatic using suicide bombings is a classic.