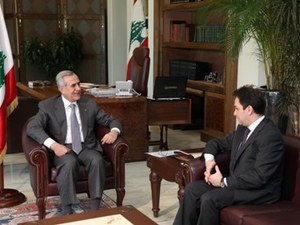 President Michel Suleiman and caretaker Interior Minister Ziad Baroud, who on Thursday absolved himself from his duties at the ministry, are reportedly “inclined to refer Internal Security Forces chief Maj. Gen. Ashraf Rifi to a judicial inquiry for repeatedly disobeying their orders to pull out the ISF Intelligence Bureau personnel of the second floor of the building affiliated with the telecom ministry, where OGERO Telecom is in charge of the installations of the third mobile network donated by China to Lebanon according to a cabinet resolution.”

Sources following up on this issue told An Nahar daily in remarks published Sunday that state prosecutor Saeed Mirza has asked Suleiman and Baroud to “file a lawsuit so that the judiciary can act accordingly.”

On Saturday, Suleiman, Baroud, Mirza and caretaker Justice Minister Ibrahim Najjar discussed at the Baabda Palace “the judicial, legal and administrative measures pertaining to the implementation of the interior minister’s resolution on the withdrawal of the ISF personnel from the telecom ministry building” in al-Adliyeh district, according to An Nahar.

what about minister nahas?

It was about time to refer Ahsraf Rifi to the judiciary, especially that it's not his first disobedience. If he were really convinced not to obey the minister's orders, he should have resigned. His actions reveal very clearly that for the last years he's been simply an employee of the prime minister himself, whether it be Fouad Siniora or Saad Hariri. Too bad that a brilliant and honest minsiter such as Ziad Baroud had to pay the price. I believe that he's the "cleanest" cting civil servant in Lebanon.
God help this country!

Mr. "dontknow", law should be applicable to all. However, Nahas didn't disobey his superiors. If there is another issue with him, let him go on trial as well.

Mr "GAB" where's the approval from the council of minister?

Why can Hezbollah take to the streets (2006) when govt wanted to shut it's teleco a network down but rifi not allowed to protect the 3rd network? Hypocrits!

That would have been applicable if all in charge in Lebanon were obeying the laws...we actually live in a lawless place...forget indicting anyone.

Ashraf Rifi needs to be put in jail!

What Rifi and those behind him did was a big slap in the face of not only Baroud, but the president himself. Rifi and clan must be punished, and preferably demoted. AFTER 20+ YEARS IT IS TIME FOR THIS MASQUERADE TO END.

Mr. GAB, it's also time to refer the Hezballah militia to the court of justice for having invaded the airport to welcome Jamil el Sayyed, don't you agree? I wont even mention the 2008 invasion of the city of Beirut.

In 10 or 20 years when we will talk about this issue we will say that Rifi acted in a manner that protect the state.

Yes, Rifi should probably tried for insubordination but I'm afraid he'll become nothing but a scapegoat. It's our entire political cast that should be sued, from geagea to aoun, and from hariri Jr to nasrallah. This cast is the cancer that's eating Lebanon. They should be all exterminated...

Both Rifi and Nahas should be investigated for disciplinary actions. Nahas actions are more dangerous because they mimic Syria by transforming public institutions to serve political parties allowing individuals close to a political to benefit not to mention the potential of Hizbollah's infiltration of sensitive communication that will be passed to Assad and Ahmadinajad. Nonetheless, the greatest danger is political mafia exemplified by Aoun that is the worst type of political corruption. With the failure of M14 in representing the Cedar Revolution aspirations, free Lebanese should declare independence from M14 and start tracking all individuals and businesses illegally benefitting from this political mafia so they'll have their day in court with the coming change.

oh wow this is crazy you guys don't realy know what is going on it is not about riffi riffi is doing his job it is about nahas want to transfer the equipmant to hisb alla to have a private network that they can spy on any one without going back to the data it is pay back from nahas/Aoun for the OTV hisb alla funded the TV the pay back is the network and baroud is kissing ....... for 8 march to accept him in the new cabinet he baroud should support riffi

Mr nahas should go home nahas is trying to give hisballa the network as pay back for the OTV since hisballa paid for it , hisballa wants his own network to spy on every one wihout going back to the data and special if new minister comes and declin to give any data to hisballa that's why they are trying to have a privat network for the data and since aoun is one of them they are taking advantage of it to get the network before any changes.