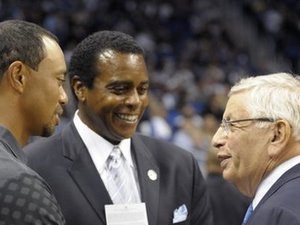 Dwight Howard had 23 points and 10 rebounds to lift the Orlando Magic to an easy 112-83 victory over the Washington Wizards on Thursday night, giving the NBA's newest arena a grand opening and spoiling No. 1 overall pick John Wall's debut.

Vince Carter had 18 points and Jameer Nelson scored 16 to help the Magic cruise to another blowout victory after a perfect preseason.

Wall had 14 points and nine assists — much of it in cleanup duty — on 6 for 19 shooting in his first meaningful professional game. He showed flashes of stardom but became just another spectator on an emotional night in Orlando.

Not that the Magic have much time to savor the Amway Center's opening. They get their first shot at LeBron James and the new-look Miami Heat down south Friday night.

A standing-room only crowd of 18,918 even brought out Tiger Woods from his Orlando-area home — once a regular at Magic games — for the first time since his sex scandal last year. Magic All-Star center Dwight Howard took the microphone to thank fans before the game, and NBA Commissioner David Stern endured a long shower of boos before he proclaimed that there's no arena "better than this facility in the world."

Magic owner Rich DeVos then walked to center court, a cane in his right hand and a team official balancing him on the left, and gave a teary-eyed speech seeing the Amway Center finally realized.

"This is a Magic building. But it's your community center. It's your place for many adventures to take place," said DeVos, 84, his voice quivering. "So we know that this place will be a place of comfort and joy, and that everybody who comes here will be honored and loved and cherished."

The Magic didn't exactly give the same comfort to the visitors.

They showed the same dominance that led them to an undefeated preseason, sprinting out to a double-digit lead from the start behind a flurry of 3-pointers and hard-driving lay-ups. Orlando went ahead by 14 after the first quarter, 58-34 at half and more than 35 points in the fourth.

A Wizards team already enduring growing pains were without Gilbert Arenas, who was back in the Washington area getting treatment on a strained tendon in his right ankle. They will also be without Arenas, the often troubled guard trying to comeback from a 50-game suspension last season after a felony gun conviction for bringing the weapon into the locker room, Saturday night in Atlanta.

The Magic finished the preseason 7-0 and won by an average of almost 25 points per game. They're the three-time defending division champions, two years removed from the NBA finals and still seething about being booted by Boston in the Eastern Conference finals in May.(AP)