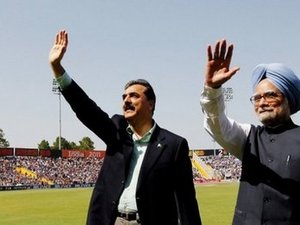 Days before peace talks, India and Pakistan were caught in an angry exchange of accusations Sunday over the movements of their warships engaged in operations against Somali pirates in the Indian Ocean.

An Indian naval ship and a Pakistani naval vessel brushed against each other Thursday. Pakistan protested Friday, saying the Indian warship undertook dangerous maneuvers, and a day later India said it was the Pakistani ship that had jeopardized safety.

The spat comes days before Indian and Pakistani officials are to meet in Islamabad for peace talks on a range of issues, including their long-standing dispute over the Kashmir region and the threats posed by terrorism.

The talks between India's Foreign Secretary Nirupama Rao and her Pakistani counterpart, Salman Bashir, would mark the first formal talks between the South Asian rivals on Kashmir since India broke off peace negotiations in 2008 after terrorist attacks in Mumbai killed 166 people.

Thursday's incident occurred while the Pakistani ship was escorting a merchant vessel, MV Suez, that had been threatened by Somali pirates. The MV Suez had been freed from the pirates on June 13 after a ransom of $2.1 million was paid. As it sped to safety, it was again threatened by pirates.

After Pakistan lodged a protest, India's external affairs ministry issued a statement countering the charge. India's defense ministry had summoned a naval attache at the Pakistan embassy in New Delhi to protest against the incident, the statement said.

Both sides have been working toward the resumption of a full-fledged peace dialogue over the past year.

India is going ahead with the talks despite testimony from a Pakistani-American who said in a trial in Chicago last week that Pakistani intelligence was directly involved in plotting and funding the Mumbai attacks. Islamabad denies the charge.

India wants Pakistan to show it is serious about reining in militants who operate out of Pakistani territory. India blames the Pakistan-based terror group Lashkar-e-Taiba for carrying out the Mumbai attack.

Pakistan wants an early settlement of its dispute with India over Kashmir, which lies at the heart of hostilities between the two nuclear-armed rivals and was the trigger of two of their three wars.