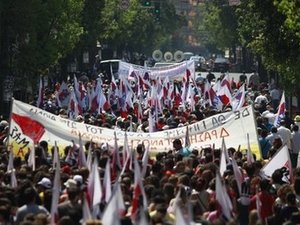 The sell-off of state assets in the power company is a major step in a €50 billion ($71 billion) privatization drive that must be completed by 2015. It is part of highly unpopular austerity plans, including more tax hikes and spending cuts, that must be passed by Parliament by the end of the month if Greece is to get the next €12 billion installment of its €110 billion bailout next month.

Without the funds, Greece will be unable to pay its debts as of the middle of July, triggering a default that would rock financial markets in Europe and abroad.

The power company, known by its acronym DEH, said nine small and large thermoelectric units were already offline as of Monday morning due to the strike, and appealed to consumers to limit their use of electricity, particularly during the midday heat, when air conditioning use is at its peak.

It said it was preparing hour-long power cuts in several areas if that became necessary.

Greece has seen near-daily protests against the belt-tightening that has slashed salaries and pensions in an attempt to stem a ballooning national debt.

"We are on strike because, believe it or not, I feel that they — the government and its measures — have taken my smile away, have robbed me of my life as well as my children's future," said electrician Giorgos Maleskos. "My only income comes from this job. After 33 years of work, we have got to the point of wondering if we will be able to survive."

The start of the strike came as Greece's new finance minister, Evangelos Venizelos, was meeting his colleagues from the eurozone in Luxembourg for a second day. Talks overnight did not produce a final agreement on the next installment of rescue loans or on a broader, second bailout expected in cooperation with the International Monetary Fund.

On Tuesday, Papandreou faces a vital confidence vote in the new government he announced on Friday, when he reshuffled his cabinet amid a major political crisis.

Talks between Papandreou and the head of the conservative opposition party, Antonis Samaras, on forming a coalition government had collapsed two days earlier while an anti-austerity rally and demonstration degenerated into riots on the streets of Athens.

Facing a mountain of debt coupled with a massive budget deficit, Greece was granted the €110 billion package of rescue loans in May 2010 to prevent it from defaulting on its debts. In return, it has been passing strict budget cuts and tax hikes in an effort to reform its economy.

But the cuts have led to a recession, and the country is now in negotiations for a second bailout — which Papandreou said Sunday would be roughly the same size as the first. European officials fear a default by Greece could set off a chain reaction that would shake Europe's banking system and economy, and drag down other financially troubled eurozone countries such as Portugal, Ireland and Spain. Both Portugal and Ireland have also taken bailouts since Greece did.

While European officials concede another bailout is needed, they have not agreed on the conditions.