Saudi Women to Hillary Clinton: 'Where are You?' 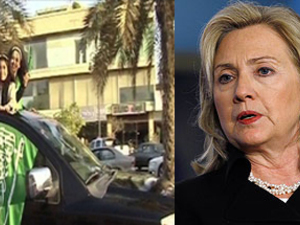 Saudi Women for Driving, a coalition of leading Saudi women’s rights activists, bloggers and academics campaigning for the right to drive, sent a letter to U.S. Secretary of State Hillary Clinton on Monday asking why she has yet to comment on this issue.

The coalition stressed in their letter that Clinton “personally making a public statement of support for Saudi Arabia opening the country's roads to women would be a game changing moment.”

Earlier Friday, a number of Saudi women drove cars in response to calls for nationwide action to break a traditional ban, unique to the ultra-conservative kingdom, according to reports on social networks.

The call to defy the ban that spread through Facebook and Twitter was the largest en masse action since November 1990, when a group of 47 Saudi women were arrested and severely punished after demonstrating in cars.

A 32-year-old computer scientist found herself behind bars for two weeks last month after driving in the Eastern Province and posting footage of her actions on the Internet.

Six other women were also briefly detained after being caught learning to drive on an empty plot of land in north Riyadh.

Women in Saudi Arabia face an array of constraints, ranging from having to cover from head to toe in public and needing a male guardian's permission to travel, to having restricted access to jobs because of strict segregation rules.

The protests were the climax of a two-month online campaign riding the winds of the so-called Arab spring which has spread mass revolts across the region and toppled two regimes.

The main Facebook page campaign, dubbed Women2Drive, said the action will start on Friday and keep going "until a royal decree allowing women to drive is issued."

"Not allowing women behind the wheel in Saudi Arabia is an immense barrier to their freedom of movement, and severely limits their ability to carry out everyday activities as they see fit, such as going to work or the supermarket, or picking up their children from school," said Philip Luther, Amnesty International’s Deputy Director for the Middle East and North Africa.

There is no law banning women from driving in the oil-rich kingdom, but the interior ministry imposes regulations based on a fatwa, or religious edict, stipulating women should not be permitted to drive.

The last en masse protest against the ban was held in November 1990 when a group of women stunned Saudi men by driving around Riyadh in 15 cars before being arrested.

The women were provoked at the time by the sight of US female soldiers who were taking part in the first Gulf War driving military vehicles freely in their own country while they are banned.

Some of them reportedly said then that as their country was in war after Iraqi troops invaded neighboring Kuwait, they felt like "sitting ducks" as they could not drive in case they needed to save their families.

The 47 women who took part in that protest were severely punished, with authorities suspending many from public sector jobs and reprimanding their male guardians.

They also faced a defamatory campaign with pamphlets calling them whores.