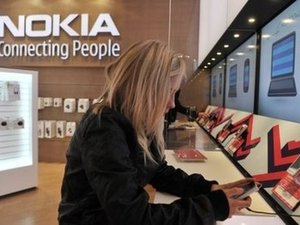 Nokia is facing steep competition from competitors in several products. At the top end of the market it is struggling against smartphones such as Apple's iPhone, Research in Motion's Blackberry as well as Android, and on the lower end against emerging market phone makers who are dropping their prices.

Nokia will start to deliver the Windows-based mobile phones in bulk next year, CEO Stephen Elop said in a speech at a technology trade show in Singapore.

"Our primary smartphone strategy is to focus on the Windows phone," Elop said. "I have increased confidence that we will launch our first device based on the Windows platform later this year and we will ship our product in volume in 2012."

Elop has acknowledged Nokia has been too slow to meet the challenge from competitors and has hinted that the company would drop its cellphone prices. Last month, the company warned both sales and profit margins in the second quarter would be substantially below previous forecasts.

Nokia also unveiled Tuesday its N9 smartphone, which is based on the MeeGo platform. The company said it plans to launch up to 10 new Symbian-based smartphones over the next 12 months.

Elop said the N9 would go on sale later this year, but declined to specify the date or price.