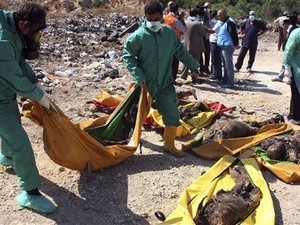 The Obama administration has struggled to explain why its ambassador to Syria participated in a sanitized trip to the country's restive north that was sponsored by President Bashar Assad's regime to attempt to justify its military crackdown.

State Department spokeswoman Victoria Nuland said Monday's trip to the abandoned town of Jisr al-Shughour allowed Ambassador Robert Ford to "see for himself the results of the Syrian government's brutality."

Yet it was unclear how Ford would have gathered such evidence on the government-organized tour. The sight of deserted streets and buildings, in and of themselves, wouldn't prove the existence of a foreign conspiracy to destabilize Syria, as the government claims, or mass atrocities, as some Western governments and human rights groups allege.

Assad's government hoped the trip to the restive Idlib province near the Turkish border would lend credence to its claim that criminals are behind the country's growing unrest. They brought 70 Western and Arab diplomats along to see the town. Authorities claim armed groups killed 120 security personnel there two weeks ago.

But she acknowledged that no residents were around to offer an opposing view from the one presented by Syrian government officials. And she couldn't say if Ford asked to see graves or anything that might substantiate allegations of widespread abuses.

"This is a government that has not allowed ... any of the domestic press, any of the foreign press into its country," she told reporters in Washington. "This is a government that has closed off the Internet and tried to keep its own people from speaking out. So to go north to bear witness, to see with our own eyes what the results of this awful encounter were, has been valuable for us."

Nuland said Ford was debriefed by Syrian military intelligence, but that he would have resisted any attempts to portray the Syrian yearnings for reform as the work of foreign instigators. Ford's conclusion was that he saw a "desperate, sad situation of a completely deserted town," and that he would be sending a full report soon.

Clashes erupted almost two weeks ago in Jisr al-Shughour. Activists say army mutineers refused to participate in the crackdown on demonstrators calling for Assad's ouster and then clashed with loyalist troops.

Government forces retook the town more than a week ago, but the U.N. refugee agency says more than 10,000 Syrians were forced to flee to Turkey. They are being sheltered in four camps across the border.

Ford's trip comes after months of criticism from Republican lawmakers who've derided the administration for sending an ambassador to Damascus. Ford took up his post in January as part of the Obama administration's attempt, now in limbo, to thaw chilly relations with Assad's Syria and improve chances that Syria might be helpful in brokering Arab peace with Israel.

The United States had left the Damascus ambassadorial post unfilled for five years in protest of alleged Syrian involvement in the assassination of former Lebanese Premier Rafik Hariri.

Shortly after Ford arrived, unrest spread across Syria. Assad has balanced promises of reform with brutal repression of pro-democracy demonstrators. More than 1,400 Syrians have been killed and 10,000 detained in three months of unrest, according to opposition groups.

For the administration, resisting the idea that Ford's recess appointment amounted to an unwarranted reward to Assad's often pro-Iran and anti-U.S. government, has been difficult. U.S. officials have been unable to point to any concrete accomplishments under his tenure. And they acknowledge that Ford has been rebuffed in several attempts to speak directly with senior Syrian officials to press the American disapproval of the government's actions.

She said Ford is meeting with a broad group of Syrians and that he is not subject to travel restrictions, even if insecurity hampers his ability to meet people. The crackdown also leaves it unclear how many Syrian opposition figures are able to travel safely to the U.S. embassy in Damascus to speak with the ambassador.