Shakira in Israel: Proud of My Lebanese Origin 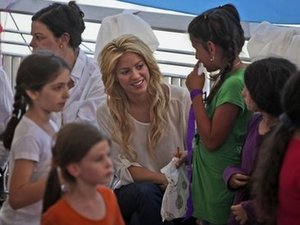 Colombian pop singer of Lebanese origin Shakira promoted her global education campaign with a stop at a joint Israeli-Arab school in Jerusalem on Tuesday.

Kicking off Israel's third annual Presidential Conference with a plea for children's education worldwide, Shakira, a U.N. Goodwill Ambassador, said the Holy Land was the "perfect place to talk about how urgent it is to invest in education."

"The most crucial decision we can make for a better tomorrow is how we educate our children," she said, speaking alongside her host, Israeli President Shimon Peres.

Shakira, 34, whose many multilingual hits include "Hips Don't Lie," "Whenever, Wherever," and "Waka, Waka," has established a number of charitable foundations dedicated toward advancing education.

At the Max Payne "Hand in Hand" School in Jerusalem, Shakira heard Jewish and Arab students sing songs and even performed part of her "Waka, Waka" dance, made famous at last year's World Cup in South Africa.

Born Shakira Isabel Mebarak Ripoll in Colombia, she has Lebanese roots. This is her first visit to Israel.

In an interview with The Associated Press, Shakira said she had great respect and love for the people of Israel.

"I'm very proud of my Lebanese heritage ... but it has nothing to do with the fact that I respect and have great affection for this country and the people of this country, both Israelis and Palestinians, and that's why I'm here, because I think that kids need us — kids don't understand about conflicts," she said.

Shakira said her experience in developing countries and charitable foundations persuaded her that investing in future generations was the answer.

"I am convinced that the road to peace has to be traveled hand in hand with education because that is the only way perhaps that we are going to achieve global stability and peace," she told the AP.

Shakira was the most high-profile international guest to take part in Peres' third annual "Israeli Presidential Conference" — an event that attracted 1,700 figures from outside Israel.

The three-day event focuses on "the issues of tomorrow — in Jewish life, in world affairs, in Israeli development, in all domains — science, technology, politics," according to Peres.

Shakira began her comments alongside Peres with a single "shalom" — Hebrew for both hello and peace — and after a young girl presented her with a necklace, she said "toda" — Hebrew for thanks.

There is nothing wrong with going Israel, I think Israel should be our ally not enemy!! Shakira we are proud of you, always thinking about others and proud of being half Lebanese do your thing xoxoxo!!

If you are really proud of your Lebanese heritage, you would not go to the Apartheid terrorist state of Israel, which even Hariri said lebanon will be the last Arab country to make peace with even if IsrAel abandons jEWISH Apartheid. The only lebaNESE WHO POSSIBLY SUPPORT YOUR VISIT TO OCCUPIED PALESTINE IS THE SLA CRIMINAL FUGITIVES LIVING IN ISRAEL.

I agree, the only way we can move forward is by become allies with Israel! They f***ed us over as much as any other country, including Syria (which up till now does a lot worse). I don't see why we don't have relations with them!

It is an Israeli joint Jewish-Arab School.

Syria is a geopolitical power. Don't you think the US bullies Canada and Mexico? on the the other hand Israel is an Apartheid terrorist state, I am saddened by the comments of some Lebanese that show deep ignorance of the suffering of an entire people driven out of his home

and i am sadden by your comment forgetting how the driven people out of his home did the same to us and wnated to take us out to be in our place : Arafat last Words : My biggest mistake is civil war in lebanon and trying to take out lebanese to stay there... Syria is a terrorist state to and trying to conquer lebanon form years she needs our coast to have more economic levels and by this more political weight in the region.. Yes we need to be allies with israel and we have to be the right hand of USA we have to get more stronger and live happier and easier we suffered for all these countries alot and noone helped us they all fucked us so now let us turn to someone else, we cant be alone we have to be protected and not by a syrian or iranin regim we dont want to go back in 1750 we have to move forward and by the help of the occident it can happens.

eeeeeeeeeee! now all those who went to see her in concert in beirut will be called israeli sionists!

To The SLA (sealed lead acid) commenters above... GO LIVE IN ISRAEL if you like it there so much.
Shakira should never go to Israel. What an idiot. Now she will never be able to come back into Lebanon! as we are at war with Israel the babykillers!

shakira is lebanese and always seems to be kind and caring ,this is revealed in her charitable work wether in africa or columbia and many other regions .However if she really had a bit of sense and kindness she wouldnt
visit a country and embrace a president who led t o the death of millions among them innocent children who know nothing about war and if she really cares about education and loves knowledge doesnt she know about the lebanese who died during different incidents such as qana masscare where UN volunteers also passed away due to the explotion of their compound , in additon to the occupation of lebanon and torturing the people in prisons and latley 2006 war.In addition to this ,if she realy likes lebanon why doesnt she support it either by donations for example in EDUCATION,health and help the needy people .If she really cares about education around the world i think that she should visit the poor undeveloped nations (the third world) such as palestine specifically gaza.

I don't think we need any other's country help,we can protect ourselfs by being UNITED
Wich I think is difficult with our thiefs inposters and liars,the stupid politicians
That treat us just like if we were sheeps,haven't u noticed that we are too busy with our politics that we forgot that they should be fixing the country not stealing our money!!!!and I think the best way to free ourselfs from them is by a REVOLUTION and I think we need it more than any other Arab country,come on we should be really close to each other Bcs we live in such a tiny country,hope you got an idea,I'm only 14 and I don't want to live just like u lived I want a Good future! And thank you xx

Shakira IS Lebanese!!!! Her father is from lebanon she was born in Colombia and her mother is Colombian but her father is labannes people usually take thier regin from thier father so she labanees (p.s I am not sayin that because she is from my country)

Really u r from my country i like that :*