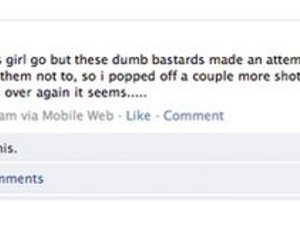 Jason Valdez is no stranger to Utah police. His latest brush with the law, however, may have been the most public.

An armed Valdez, 36, held a woman hostage at a motel in a tense 16-hour, overnight standoff with SWAT teams, all while finding time to keep his family and friends updated on Facebook, authorities said.

He even got some help from the outside over the social network: A friend posted that a SWAT officer was hiding in the bushes.

When officers swarmed the room, Valdez shot himself in the chest with a handgun, Ogden police said. On Tuesday, he was in critical condition.

The Associated Press reviewed Valdez's Facebook profile page on Tuesday. Police believe he wrote the messages during the standoff.

It wasn't immediately clear, however, whether police were following the posts in real-time, though the department spokeswoman said officers routinely search the Internet and other sources for background on suspects.

In all, Valdez made six posts and added at least a dozen new friends.

His family and friends responded with 100 comments. Some people offered words of support, and others pleaded for him to "do the right thing."

Court records show Valdez has a criminal history, including convictions for aggravated assault and domestic violence in front of a child.

In March, prosecutors filed felony and misdemeanor drug possession charges against Valdez. A judge issued a warrant for Valdez's arrest after he missed a June 1 preliminary hearing in the case.

On Friday afternoon, Ogden police tried to serve Valdez with a felony drug warrant for the missed court appearance.

Valdez barricaded himself inside the Western Colony Inn.

"I'm currently in a standoff ... kinda ugly, but ready for whatever," Valdez wrote in his first post at 11:23 p.m. "I love u guyz and if I don't make it out of here alive that I'm in a better place and u were all great friends."

Valdez said in posts that he was with a woman named Veronica. Police described her as a hostage.

In his posts, Valdez told friends when police shut off the power that his "hostage" was fine — and with him willingly — and that police are jeopardizing her life by their actions.

At 2:04 a.m., Valdez posted two pictures of himself and the woman.

"Got a cute `Hostage' huh," Valdez wrote of the photographs.

At 3:48 a.m., one of Valdez' friends posted that police had a `gunner in the bushes stay low." Valdez thanked him in a reply.

The final post was at 7:25 a.m. Saturday: "Well i was lettin this girl go but these dumb bastards made an attempt to come in after i told them not to, so i popped off a couple more shots and now were startin all over again it seems ..."

Police believe that responses from Valdez's friend gave him an advantage.

Authorities are now discussing whether some of Valdez' friends should be arrested and charged with obstruction of justice for hampering a police investigation. "We're not sure yet how to deal with it," said Croyle.

"We're talking about it and trying to figure out how do we address the kind of conflict that it presents," Croyle said.

Valdez could be facing new charges stemming from his actions during the standoff, including fire his handgun at police, Croyle said.