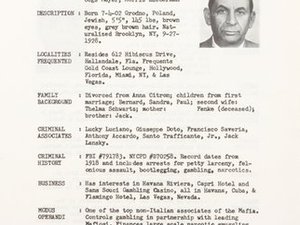 It was an unlikely — and coveted — find: a thick United States government file discovered on the backseat of a New York City taxi, its pages containing mug shots, criminal associates and favorite hangouts of over 800 Mafia members during the 1950s and early 1960s. Such notorious figures as Carlo "Don Carlo" Gambino, Meyer Lansky and Salvatore "Lucky Luciano" Lucania each had their own entries.

Nearly 20 years after it was found inside the yellow cab by a passenger, the 3-inch thick, three-ring binder stamped "Mafia" and "United States Treasury Department Bureau of Narcotics" is being offered for sale at Bonhams New York on Wednesday. Its pre-sale estimate is $10,000 to $15,000.

The file was compiled sometime between 1957 and 1962 by the Bureau of Narcotics, an early iteration of the Drug Enforcement Administration.

Robert F. Kennedy is believed to have used a copy of the file while he was U.S. Attorney General in 1963 during the televised McClellan Hearings into organized crime.

Only 50 copies of the file were believed to have been printed. The one for sale at Bonhams is No. 31, and the other copies were probably destroyed, said Christina Geiger, director of Bonhams New York fine books & manuscripts.

Geiger said the passenger found the binder inside a black bag on the seat of the cab on a snowy night in the early 1990s after leaving Radio City Music Hall.

"He basically just kept it to himself until contacting HarperCollins in 2006," said Geiger. The owner, who is connected with the film and music industry in Hollywood, did not wish to be identified by name.

HarperCollins published a facsimile of the book a year later, with some sections redacted. "Wiseguy" author Nicholas Pileggi called the publication "a treasure trove for true-crime buffs and mob aficionados."

The book is arranged regionally by state and country (Canada, Italy and Mexico). One page is dedicated to each hoodlum and a quick glance identifies New York as the capital of the underworld in the U.S., with 350 criminals listed, followed by California with 58 and Illinois with 45.

Anyone interested in the movies, "The Godfather" and "The Sopranos" will find the files fascinating, Geiger said.

"It really gives the flavor of organized crime in the middle of the century," she said. "From a book collecting perspective, this is the first time that the Mafia is acknowledged by the federal government, and probably the first time that the word was used in that context because (J. Edgar) Hoover was still denying the existence of organized crime not long before this was produced."

"What's so interesting is so much work went into this; 843 people, and each of them has a list of localities frequented, who they're married to, what their kids' names are, who their friends are, where they traveled to," she added.

The entry for Lansky, for example, says he was born Meyer Suchowlansky in 1902 in Poland and is "one of the top non-Italian associates of the Mafia," who "controls gambling in partnership with leading Mafiosi and finances large-scale narcotic smuggling and other illicit ventures."

Lansky was portrayed in "The Godfather II" movie by the character Hyman Roth who whispers to Michael Corleone: "We're bigger than U.S. Steel." The Bureau of Narcotics files lists Lucky Luciano among his criminal associates, his favorite hangouts as Hollywood, Miami and Las Vegas and his business interests as hotels and casinos in Cuba and Nevada.

Titillating facts on Lucky Luciano include a description of him as "one of the highest ranking Mafia both in Italy & the US. From Italy he participates in directing of American rackets & regularly receives his share of the profits through Mafia couriers." His friends include some of the most powerful and influential Mafia bosses: the "prime minister" of the underworld Frank Costello and crime family boss Joe Bonanno.

On the bottom of each entry are the words: "Property of U.S. Govt — for official use only. Not to be disseminated or contents disclosed without permission of Commissioner of Narcotics."

Geiger said the cloth cover binder is not dated, except for two pages. One is from 1959, the other from 1962, indicating the files were most likely compiled before the McClellan hearings (there's no mention of the testimony in the book) and after the police raid on the mob conference in upstate New York in 1957.

There was evidence that Robert Kennedy used a copy to select "who he was going to target in the McClellan Hearings; 1,500 people testified before that committee and the Mafia file was used as a source for the hearings," Geiger said. "It started with the Bureau of Narcotics and then kicked upstairs to the attorney general's office."

Genovese crime family soldier Joseph Valachi testified for the government, famously coining the phrase La Cosa Nostra. It was the first time that the government and the public heard of the underworld as an integrated network of criminals with a hierarchical structure.