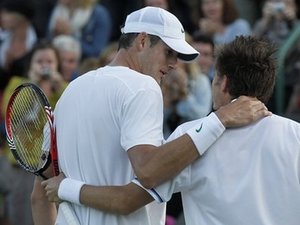 Inevitably, the sequel didn't live up to the original. Not even close.

The replay of the longest match in tennis history turned out to be a ho-hum Part II, with John Isner beating Nicolas Mahut in straight sets in two hours in the first round at Wimbledon.

It was a far cry from the 2010 epic, in which Isner triumphed 70-68 in the fifth set of a marathon that lasted 11 hours, 5 minutes and stretched over three days.

It finished after 2 hours, 3 minutes, with Mahut sailing a forehand long on the second match point. This match lasted 9 hours, 2 minutes and 149 games less than the original.

"Everything was different," Mahut said. "It's another year, another match, another tournament. It was difficult to play this match. We talked about last year during three days. That was not easy. But he handled (it) much better than I did."

Last year's match was played on Court 18, which now has a plaque commemorating the event. They played Tuesday on the new Court 3, which was half empty by the end of the match.

"I'm actually glad they put out here on this court," Isner said. "I don't know if they want to tarnish the legacy of Court 18 by playing a second time."

At the end, the two men — who became close friends after last year's encounter — shared a warm embrace at the net. Isner dominated play, breaking three times and finishing with 41 winners to only 10 unforced errors. Both men had eight aces.

"It wasn't easy, but obviously it was considerably quicker than the last time we played," Isner said. "I definitely wanted to finish it here and really glad I am because we were running out of daylight.

"It's a nice feeling I don't have to sleep on finishing this match."

Isner sympathized with the Frenchman, who seemed to be struggling with a knee problem.

"He has nothing to hang his head about at all," Isner said. "He fought just as hard today. Maybe he wasn't 100 percent. ... Really, it stinks for him that he's out now."

Isner, who lost in the second round last year to Thiemo de Bakker, said his goal is now to make it into the second week.

"I was more relieved last year to finally get it over with because what we did was remarkable, and you can't ever think something like that could happen," he said. "But I also knew after last year's match that I had no shot in the second round. That was kind of tough to swallow. This year I'm happy to get through this one."

Mahut was philosophical about how things turned out.

"What we did last year, it's much more than a tennis match," he said. "I'm very proud of it. But this is from last year. Today I just lost the match in three sets. It's a different story."