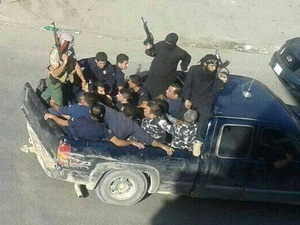 Five Lebanese citizens have joined the extremist Islamic State group in the outskirts of the Bekaa border town of Arsal and two of them played a role in the recent decapitation of two captive Lebanese troops, a media report said on Wednesday.

“Five individuals who hail from (the northern city of) Tripoli have joined the IS group in Arsal's outskirts,” LBCI television reported.

It identified them as “Ahmed Miqati and his son Omar -- who are wanted by Lebanese security agencies -- Bilal Miqati, Mohammed al-Eter aka Abou Yaacoub, and his brother Bilal al-Eter.”

The TV network said the five men left Tripoli as the implementation of a strict security plan got underway on April 1, when several other top fugitives went on the run.

“Bilal Miqati was behind executing one of the Lebanese troops as the investigations of security agencies have revealed, while Mohammed al-Eter was present during the beheading of the other soldier,” LBCI said.

On Tuesday, the TV station reported that “a computer comparison has proved that the features of the terrorist who stood over martyr Ali al-Sayyed's body are identical to those of Bilal Miqati.”

The security agency probing the case has become confident that “Miqati is the one who executed a-Sayyed,” LBCI said on Wednesday.

The two slain soldiers were among around 35 troops and policemen who were abducted by the IS and al-Nusra Front during deadly clashes with the army in and around Arsal in early August.

Highest treason against Leb. They should be decapitated z same way they killed our soldiers..no prison terms for all these terrorists scum bags..

And they say Tripoli is not a hub of terrorism.

When a militia from Tripoli storms Beirut and Jabal Lunban and topples a government, then I will agree with you. Otherwise there are much bigger hubs of terrorism in Lebanon. Unfortunately, these terrorists have a choke hold over the whole country.

Path ese individuals are nothing more than scum and anyone who defends their actions is no better. There are many law abiding and life loving people in Tripoli and these few rats spoil a whole city's reputation. May they be found and dealt with accordingly

with a screen name like that, who could accuse you of being biased...!

Who will blame Assad first? Are these Rifi's former employees?

Of course you are not sectarian southern. Your posts are the proof

I wish Samer Hanna can hear you, he would be so proud of you. Have they exceuted his killer? I can't remeber if he was hanged or if he is at large.

Please shut up. Friendly fire is not comparable to intentional beheading.

shameful how they keep exploiting samer hanna's name after years to justify the hundreds of soldiers they treatcherously attacked and killed.

have some dignity helicopter, if you're capable of it, and let samer hanna rest in peace. he's not some useful pretext you can bring up anytime you're short on arguments (apparently all the time) to defend the crimes of your friends.

BS comments showing how evil you are . . HA

old news, al akhbar revealed this weeks ago and the regular in-denial's wouldnt hear it.