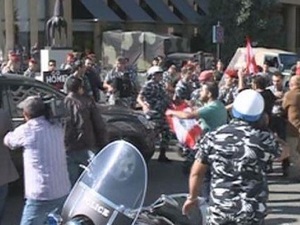 Lawmakers extended on Wednesday the mandate of the parliament until June 2017 amid a boycott by Christian MPs from the Free Patriotic Movement and the representatives of the Kataeb Party in the legislature.

FPM lawmakers from the Change and Reform bloc resorted to boycott while Marada Movement and Tashnag Party representatives in the bloc attended the session. But members of Marada leader Suleiman Franjieh's bloc voted for the extension as Tashnag's two lawmakers voted against it.

The draft-law on the extension of parliament's tenure for two years and seven months until June 20, 2017, which had been proposed by Zahle MP Nicolas Fattoush, received the vote of 95 MPs.

On Tuesday, FPM leader Michel Aoun, who heads the Change and Reform bloc, said his MPs reject an extension of the 128-member parliament's tenure, whose alternative is holding the parliamentary elections.

Speaker Nabih Berri had warned on several occasions that the session would undermine constitutional partnership unless key Christian blocs participated in the vote.

Fattoush suggested an extension of two years and seven months under the excuse that the elections could not be held amid a deteriorating security situation.

Despite the boycott of the FPM and Kataeb, the Lebanese Forces, another main Christian party, voted in favor of the extension, claiming that institutions would be paralyzed if MPs failed to extend their own term.

If parliamentary elections were held amid a vacuum at the helm of the country's top Christian post, the government would become illegitimate because the constitution states that the head of state should name a new prime minister to form the cabinet.

Lebanon has been without a head of state since May when Michel Suleiman's six-year term ended amid the failure of the rival MPs to elect a successor.

MP Sethrida Geagea said following the session that the LF was compelled to vote for the extension because it wants to "save the country by taking unpopular decisions.”

But the FPM described the vote as an attempt to abolish democracy and the rotation of power.

Following an extraordinary meeting that the party's members held in Rabieh, Foreign Minister Jebran Bassil said: “We just witnessed a robbery in parliament.”

This was the second time parliamentarians extended their own terms, giving them a full eight years in power— double their allowed mandate.

There were attempts to thwart their move earlier Wednesday. As MPs were arriving to parliament ahead of the session, Civil Movement for Accountability (CMFA) activists staged a sit-in at an area near Nejmeh Square in downtown Beirut.

At one point, a man climbed on a car before being dragged away by security forces.

why since 2005 we do not have an electoral law ??
the people who hindered and blocked the opportunity to have a decent based on proportionality electoral law (stipulated in taef accord )
are the culprit and should be hangeg for treason
god bless democracy

damn those MPs, of course they are going to "re-elect" themselves forever if we dont stop them.

nice one humble, letting the people vote is now "chaos"

We can stop them Mowaten, of course you do know how much power is in the hands of the people. But in our case in Lebanon, because we talk superficially, our power will remain superficial. Take this for example. If people decide to take the reins of power into their hands, at the beginning we will all walk as Lebanese, a few hundred meters down the street, the Christians will become divided as usual into LF/FPM and Marada. Then the Sunnis will branch off as usual following their respective parties, and as for the Shiites, Hezbollah and Amal will take their lot. Result? The streets will empty, people will get entrenched again and our politicians will win the day as usual. Let us not kind ourselves, people power exists outside our borders, and very far too. We can talk, of for sure, but this is it, let nothing touch the party or its leader. So long.

The problem in Lebanon is not the parliament. It is the Hezb that holds the whole country as hostage to its own agenda.

how weird.. You remind me of myself when I used to post on naharnet before I got banned for abuse and bad taste

I strongly urge the Naharnet staff to officially denounce the extension of the 128 deputies, and also more importantly not to recognize their self extended mandate. The political elites in Lebanon have to be stopped before it is too late.

Please Sebouh80 (Guest), may I ask you politely not to use my private registered guest name. I mean from all the names in the world like Abbas Madrass or Jaafar 3antar, why mine????

Suleiman Franjieh 28 October 2014 “The postponement of the parliamentary polls will inevitably take place. Some sides dare to say that they support the extension, while others hide behind political calculations. Lebanon cannot support holding the elections even though we wish otherwise were true. We are faced with vacuum or the extension. We must be realistic and honest with the people.”

If these groups mean what they are saying, simple Resign. ... or you know what you will be called...

Hard to see how this is a solution for vacuum when the extension is for nearly 3 years. If it was for a few months until they figure out a solution to the problems at hand, one would give them the benefit of the doubt but to extend the term, not once, but twice and for such a duration... that's just unacceptable.

The excuse being used for not holding elections is ridiculous. The situation is rarely stable in Lebanon. If security concerns are the cause of the extension, our dear politicians will make sure that these security problems linger for as long as possible.

When will you understand that HA and its servants are working for a Mutelateh?

The MPs who boycotted or voted against the extension should resign and trigger local by-elections; they will simply join the by-election that is going ahead soon to replace Jezzine MP Michel Helou who sadly passed away last June. This way if they win reelection their continued tenure in Parliament becomes legitimate at least in the eyes of the voters and their opposition to the extension genuine. It will also gives them valid barging rights against the ones who endorsed the extension. But if they continue with their extended term without by-elections, as some of them did the last time the term was extended, their opposition to extension is nothing but a cynical, dishonest, insincere stunt designed to mislead the people.

funny that when hezballah pressured the shiites members of the constitutional council into boycotting the sessions to study president suleiman's filed challenge to the extension aoun did not say anything.. biting the hand that feeds you and all that.

When will you understand that HA and its servants are working for a Mutelateh?

Tomatoes and eggs are not enough for those corrupt MPs. Should have pelted them with watermelons also

waw! even frangie and hezbollah are under the influence of saudis? how strong are they?!!! LOL

Suleiman Franjieh 28 October 2014 “The postponement of the parliamentary polls will inevitably take place.

Some sides dare to say that they support the extension, while others hide behind political calculations.

Lebanon cannot support holding the elections even though we wish otherwise were true.

We are faced with vacuum or the extension.

We must be realistic and honest with the people.”

yes for sure! they all share the same cake and give themselves rights and shares in different public services making money instead of satisfying the needs of citizens...
any MP denouncing the theft of the country? none as they all have interests... they view Lebanon as a company not a country!