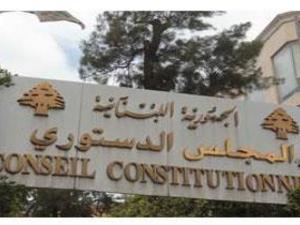 The Constitutional Council rejected on Friday an appeal filed by the Free Patriotic Movement against the extension of parliament's term.

It said that the rejection was aimed at avoiding prolonging vacuum at constitutional institutions.

“The staging of the parliamentary elections on a regular basis is a constitutional principle that should never be tampered with,” it stressed.

It also added that linking the elections to the agreement on a new electoral law or any other condition “violates the constitution.”

The council remarked that the extension violates the constitution, “but the extraordinary circumstances Lebanon is passing through forced the council to reject the appeal.”

The FPM, headed by MP Michel Aoun, had referred in its challenge to such extraordinary circumstances.

The council explained that the parliamentary elections should be held once these circumstances are no longer present in the country.

Moreover, it condemned the ongoing vacuum in the presidency, saying it is a “blatant violation of the constitution.”

“Its excuse over the vacuum at the institutions is unjustified,” he added.

The parliament extended its term earlier this month until June 2017 despite the boycott of the FPM and Kataeb MPs.

Two others voted against the law but 95 lawmakers extended their own terms for the second time, giving them a full eight years in power— double their allowed mandate.

now will see how the fpm will react;)

They will huff and puff and act appalled and outraged, sleiman frangieh call it calculation.

They will insult everyone and everything that moves around them, so typical.

mazra3aa ruled by thiefs and agents
the best way is for true statesman if there is any, is to resign from government and parliament and give back the power to the people then will see muppets and agents what will they do
cause their resignation will force the army to take control
god bless democracy in all gulf countries

god bless democracy in all gulf countries, of coarse especial as it burns bright in syria.. on the lights of exploding barrels

the army won't take control of everything, the resistance will make sure of it.

Wait till the bus full of the usual m8 posters arrives and they all at once regale us with the deluge of conspiracy filled posts, they are starting their shift soon, the bus is late today probably stuck in traffic or got a flat tire.

1 hour ago FPM leader Michel Aoun told his visitors that the decision of the Constitutional Council is wrong.

You see aoun knows everything and better than everybody. He is a general, a warrior, a politician, and a seasoned judicial authority on constitutional matters.

and where did you come out from flamethrower?:)))

Accounts, do you know this joke? When Aoun died,he arrived to the gates of heaven to be judged by Saint Peter, the keeper of heaven's gates. So Saint Peter asked Aoun, tell me your story son. But Aoun instead replied by asking Saint Peter about what he was doing on that seat as Aoun feels the seat was his. Lol. The other joke is this: Saint Peter wanted to test whom of two lied more, Geagea or Aoun, so he asked them to walk over the water in a pool, the one who walked meant that he did not lie, the one who walked meant he was honest. So Geagea being the first to cross naturally sank way down. Then Aoun's turn, Lo, he walked on the water all the way. Suspicious Saint Peter sent a diver to check, and this is what he saw, Sayed Hassan carrying Aoun on his shoulder walking under water. Lols.

As I have said on previous times that the so called constitutional court is nothing but a farcical institution.

"The staging of the Parliamentary elections on a regular basis is a constitutional principal that should never be tampered with". "The council remarked that the extension violates the constitution". Can someone tell me please ' is the council legislating or is it supposed to be interpreting the law? If they are legislating then they probably arrived at the right decision according to their believes, if they are interpreting the law then they are contradicting themselves and should have accepted the appeal against the extension.

Nov 9 2014 - Al-Rahi even slammed boycotting MPs, saying they should show their protest to the extension by announcing their resignations.