by Naharnet Newsdesk over 6 years 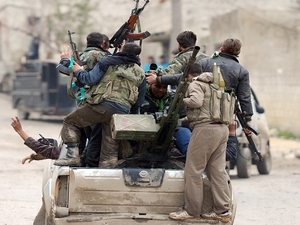 Syria has accused Jordan of training "terrorists" on its soil and urged the U.N. Security council to force an end to Amman's backing of rebel groups.

The accusation came in a letter sent Monday by the foreign ministry to U.N. Secretary General Ban Ki-moon and the president of the U.N. Security Council, the official news agency SANA said.

The letter criticized the "public and systematic support provided by the kingdom of Jordan to terrorist groups, increasing the suffering of Syria's citizens because of crimes committed by these groups."

It also accuses Jordan of having "set up terrorist training camps on its soil as well as operations centers to help these groups and facilitate the infiltration of thousands of terrorists a day (into Syria)."

Jordan is a leading supporter of the Syrian opposition, and this month the United States began training opposition fighters on Jordanian soil to fight the Islamic State group.

Syria's government refers to all those seeking Assad's ouster as "terrorists."

The letter urged the Security Council to take measures "to stop the actions of Jordan that threaten security and stability in the region and the entire world."

Last month, rebel groups including Islamists seized the key Nasib border crossing between Syria and Jordan, the last post between the countries that remained under regime control.

syria has been training terrorists for years and sent them to Lebanon... it just reap what it sowed...

A new batch of so called "moderates" whom will join ISIS and Nusra later on anyway.