by Naharnet Newsdesk over 5 years 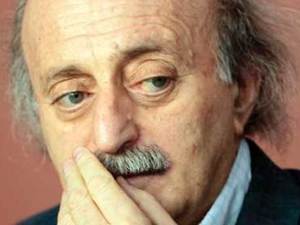 He said via Twitter: “An ambassador of a major country asked me why I opposed Lebanon's joining of the World Trade Organization, as did the the European Union ambassador.”

“My reply to both was clear in that the big fish eats the small fish and I am in favor of protecting the local industry and agriculture sectors,” he remarked.

“My position will remain opposed to that of a former prime minister, who used to heap praise on the benefits of free trade and open markets,” he tweeted in an indirect reference to Saniora.

“We do not want the big fish that eats the small fish or hiding the truth behind the illegal internet,” Jumblat said.

“By the way, the big fish of the World Trade Organization is the same one behind the illegal network.”

The MP did not give further evidence of this claim.

Telecommunications Minister Butros Harb revealed last month that around four illegal internet stations have been proven to exist in the mountainous terrains of al-Dinnieh, Ayoun al-Siman, Faqra and Zaarour.

Suspects involved in the case and believed to be associated with the state-owned OGERO were arrested on Monday over possible links to the networks.

Reports speculated that OGERO chief Abdul Moneim Youssef was involved in the scandal.

Early in March, the parliamentary media committee unveiled what it described as a “mafia” that are taking advantage of internet services by installing internet stations that are not subject to the state control.

The owners of these stations are buying international internet bandwidth with nominal cost from Turkey and Cyprus which they are selling back to Lebanese subscribers at reduced prices.

"The owners of these stations are buying international internet bandwidth with nominal cost from Turkey and Cyprus which they are selling back to Lebanese subscribers at reduced prices."

In my opinion they should be rewarded for bringing a better service at lower prices.

I get my internet directly from Europe. I bought the dish and modem from a Houthian in Dahiah. My ISP is in Beljika. I cannot afford to have my personal and professional life monitored by the terrorists.

I just received instructions on whatsapp for my next clandestine mission: It reads "Terminate W.J". How do you think that is?

The first ever thief recorded in history was a Houthian. His name was Ali..... Baba.

Apparently he was a "Sayyid" and had 40 followers.

I meant to say TFEH