Gemayel to Take Govt. to 'Int'l Courts' for Polluting Sea with Trash 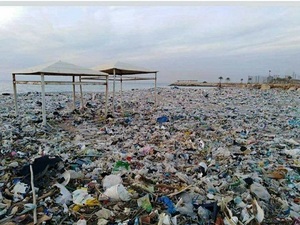 Kataeb Party chief MP Sami Gemayel on Monday blasted the government anew over the waste management crisis, announcing that he will take it to “international courts” for polluting the sea with garbage.

“Words cannot describe this scene. Today we are present at Keserwan's shore but the entire shore of Mount Lebanon is witnessing a similar situation,” Gemayel said at the Zouk Mobseh-Nahr el-Kalb shore, where seawater has invaded a garbage landfill that is present there and pulled piles of trash into the Mediterranean.

“The sea has filled with garbage because officials who lack conscience and competency are in charge of the waste file,” Gemayel lamented.

“The Council for Development and Reconstruction is in charge of overseeing these works and there is an environment minister and a government. They are all to blame and they must be held responsible for what we are witnessing today,” the young politician added.

“They have not carried out any measure... and garbage is flowing into the sea due to the absence of a wave breaker,” he explained.

Asking the Lebanese judiciary to hold the CDR responsible, Gemayel called for the resignation of the Council's president and members “because they are responsible for implementing the contract terms.”

He also called for the resignation of Environment Minister Tarek al-Khatib.

“We will resort to international courts, because the ruling class is working against the people and the people have the right to hold it accountable,” Gemayel added.

“They are worried about a film in movie theaters but what is this that we are seeing today? Doesn't it tarnish Lebanon's image?” he went on to say, referring to the ongoing controversy over Steven Spielberg's latest film, "The Post".

Reminding that Kataeb had proposed creating landfills in Lebanon's Eastern Mountain Range, Gemayel emphasized that “there is no excuse not to dump the garbage there.”

In every country beaches and the sea are national treasures but not in Lebanon and not for the Lebanese.

This is a crime..... and yet, the Lebanese will re-elect the very same politicians who are responsible for this irreversible environmental crime.

Vote for crazy Donald trump, he will fix it because he is a business man and if it does not get fixed he will fire you.