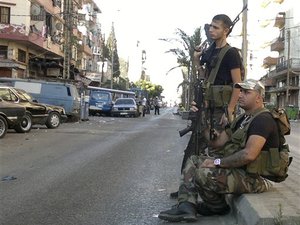 Al-Jaafar clan denied on Wednesday media reports saying that it has formed a military wing, stressing solidarity with the families of the kidnapped Lebanese in Syria.

“We haven’t formed any military wing as long as there is an army that protects the nation.” the clan said in a statement.

The statement stressed on the clan’s solidarity with the families of the kidnapped Lebanese in Syria, confirming that it will exert efforts to release them.

“We are keen on safeguarding the civil peace, the nation’s stability and coexistence” among all Lebanese.

Al-Jaafar called on all parties to exert efforts to free the abducted Lebanese.

Last week, al-Meqdad clan announced the formation of a previously unknown military wing after the Free Syrian Army allegedly abducted of Hassan Salim al-Meqdad in Damascus, prompting the kidnapping of Syrians in Lebanon said to be active in the FSA, and a Turkish national to press the release of Hassan.

Eleven Lebanese pilgrims were also kidnapped in the northern Syrian province of Aleppo on their way home from a pilgrimage to Iran on May 22.

Conflicting reports have emerged on their fate after Syrian government forces shelled the area of Aazaz where they were being held.

I think that the shiites in Lebanon did not experience the civil war in the same way as the people in Beirut and north plus jabal.

In the south, the shiites lived mostly in the south back then, it was more about israel going in and out palestinians attacking israel leading to israel bombing back. They also had a couple of groups fighting each other , like Amal and Hezb. Some Shiite groups fought the palestinians. Dont forget the SLA.
Who was fighting who was pretty clear.

Meanwhile, in the other areas we had 25 different groups. Nobody wants to experience the chaos that follows from having so many armed groups.

This is what is happening now among the shiites with "clans" starting their own military wings. This will lead to your own destruction, just as it lead to Lebanons destruction when it happend the last time.

there are no clans, it is all amal and hizbushaitan under cover of false names.

They are better off making some chicken wings.

All these so called clans are in Hizballa and Amal pockets...they always kill each other over criminal activities and drug trafficking...

Stargate, why should I congratulate someone for not carrying arms and starting a Militia when in they shouldn't in the first place?

Its like thanking someone for not robbing a bank.

Thinking you are a way off buddy.

Just curious, how is it that everyone categorizes all Shiites in one group? I'm a "Shiite" (I hate using these terms but seems like that's how people talk here), my family has no political wing, military wing, or any affiliation with Amal, Hezballah, or any other party. I speak for the majority. The only reason Shiites support Hezballah is because they fought the Israeli's, just like the Shiites supported the Israelis initially when they fought the Palestinians. This is the karma for those who lived like kings while the government deprived the South. Today, there is no deprivation, there is no need for Hezballah, there is no need for any of this nonsense. But when I read the blatant HATE AND SECTARIAN remarks on this forum, especially from my brothers who were essentially Syrian lackeys for 30 years.

Again, wholesale generalization and a blanket judgement on an ENTIRE religious community. My friend, although I understand your point, you are just as misinformed as those you're speaking again. Shame on uneducated people for saying such words, but it's more of a shame when people like you (which respect, I've read some of your comments, you seem like a reasonable guy) generalize in such a way. I refuse to be categorized and compartmentalized based on the nonsense we read here.

You are missing the point stargate. Who are those F...ers to give their opinion about stability and coexistance. I dont care about their being keen on anything. Let them just follow their duties as citizens and shut up.

@stargate,,,i congratulate you for being such an idiot believing to the so called patriotism of this al jaffar clan,,,,this clan is a small particle of the cancer called hezbollah that is killing Lebanon little by little,,,

Man... this clan and all the others existed way before the republic of greater Lebanon was formed.... Plus hezbollah is not a cancer, just a symptom of this cancer... we pretended forming a state in 1943, while we didin't have a clue what it means... and we still don't, whatever our political affiliation is... "Deux négations ne font pas une nation"

Hillbilly families forming military wings. WTF? Politicians are missing out on an opportunity to sell licenses to allow these families to form military wings. Might as well make more money since they don't want to stop it.

Yeah... but that was 30 years ago, and not for the same purpose. Retard!

What do you mean by "Shiites"? The political leaders of this community (similar to when we refer to the American or French governments by, "the americans" or "the french") or every man woman and chid that happened to be born into that community? (the way Hitler used to refer to the Jews)

What do you mean by "Shiites"? The political leaders of this community (similar to when we refer to the American or French governments by, "the americans" or "the french") or every man woman and chid that happened to be born into that community? (the way Hitler used to refer to the Jews)

Different "clans" forming military wings (or not) and no response from the Hezz? If these "clans" were non-Shia would they remain silent?

all we need now is tents, swords and camels w'byikmal el circus...tfeh.

Yes, I agree with all points except I believe Assad is going to be around for longer than anyone imagined, killing and maiming innocent people with total impunity and negligent disregard for human life...

Again, I was booed before for saying this but I'll proudly say it again...we would be fools to assume that the Shia sect is not as much a hostage at gunpoint of the Party of Satan, as we are. Yes some of them shimtenin fina and hiding behind the Party's Weapon of Terror and Intimidation but most of them want to be free of this cancer as much as we are. Take the threat away and most of them will join M14.

Thank you Naharnet for deleting my post again, so much for free speech that you stand by.

Partition is the answer.

All this game is clear. Hezbollah using proxies ( chiite families close to them and gangs) to spread the syrian conflict. How can Hezbollah and Amal pretend they cannot stop Al meqdad family or others while they can protect dahieh from anyone entering and PRETEND beeing able to destroy Israel and they cannot even stop 40-50 militiamen? What kind of bullshit is that?
As for the 11 captives, i think clearly 2 scenarios happened: Either they were sent supposedly with Hezb's approval and protection and got caught by FSA, or they had protection from the regime that handed them to the FSA indirectly to spread the chiites hatred towards the FSA. Wallaw nobody can remember the games that the syrian regime loves to play?

Remember my words friends, what is happening now is clear, Bachar is negotiating his exit but not at any price. he wants cover for the massive military operations till he cleans north of syria. He is attacking damascus and trying to give cover for the last alawites to leave and head north. He knows he will eventually lose this battle. He wants to create an independant alawite state in northern syria with turkey borders since there is up to 20 million alawites there. after beeing discriminated by the turks , they might join assad in his new state. As for iraq , bombings have restarted, the americans are creating that in order to partition iraq and draw a new map where south iraq ( chiite part) will go as well to Iran and iraq will mainly be sunnite.

Clinton was talking about the new middle east before the arab revolutions but nobody understood what is and laughed. This is the new middle east created by the USA and Israel. they are painting it now. They want the arab world to be mainly sunnite with no chiites in it. They will eventually cut Iraq and we are seeing the repressions in Bahrain against chiites. They will all gather in Iran and create chaos from inside. Iran will be dealt with the same way other arab countries were deal with. Fragmentation from inside with new arrivals of Arab chiites which will move the persian chiite into revolution. All this theory stays only an opinion. But seeing whats happening , i dont need to be michel hayek to see where its going.

Bachar is given time so that he can still wipe out sunnis from the north and create his mini state. he will of course be very weak and will not be able to help Iran in case there is a problem as well.Lebanon will be the only battlefield left if its citicizens allow it to be. We must be very careful, in lebanon , there is no middleground, it is either a chiite/ alawite vs palestinians/sunnite war or a cleansing of all weapons on the streets including palestnians and hezbollah and build a state together.

lol, you obviously come from another planet stargate...