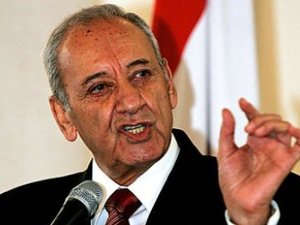 Speaker Nabih Berri stressed on Tuesday that Lebanon has the right to preserve its natural resources, urging officials to speed up deals with foreign companies to drill for oil and gas in the country’s Exclusive Economic Zone.

Berri reiterated to As Safir newspaper that neighboring countries will soon start oil and gas exploration.

“I’ve discussed this issue with President Michel Suleiman before he headed to New York, and agreed that he will discuss the issue at the United Nations especially with Secretary General Ban Ki-moon,” he said.

The speaker noted that issuing a decree concerning the issue should coincide with launching negotiations with Cyprus to define the maritime border.

Berri considered that the developments around the world should motivate Lebanon to demand its rights, away from personal interests and lame disputes.

“Everyone should have a national responsibility,” he told the daily.

Lebanon and Israel locked horns over the maritime border after the discovery of potential offshore energy reserves.

The Israeli cabinet in July approved a map and submitted it to the United Nations, which has been asked to mediate the growing conflict.

The Israeli map conflicts with Lebanon's proposed borders, which give the Jewish state less territorial waters and was submitted to the U.N. last year.

Beirut argues its map is in line with an armistice accord drawn up in 1949, an agreement which is not contested by Israel.

I would remove from the headline above 'says Lebanon', and keep the rest!

Due to the extent of the Exclusive Economic Zone (extends to 320 KM off shore ) disputes always arise between nations concerning their demarcation. For example if natural gas is discovered between Cyprus and Lebanon the two nations will have to divide the outcome.
These disputes are solved diplomatically and not by fiery speeches and rocket arsenals.
Other nations do not seem so eager to start wars that might destroy a lot more than what the dispute is about.
In Lebanon the politicians' empty posturing has turned the country into a ridiculed rogue nation at the image of Hezbollah's master , Iran.

They have been sharpening their teeth over this gas reserves for years now. The fight will be on how to devide the till. It will be stolen long before any citizen realize the benifits.

the filthy zionist information war department got the foam on their mouth because won't let go of it's natural right.

Abou osba3 (Hassouna) vowed to protect our fuel wealth till the last breath of the Resistance. Without asking the governement, he assigned himself responsible of the fuel sector, since this latter is related to the israeli occupation of Shebaa :). Hence he created a new reason to preserve the weapons of his militia in case israel leaves Shebaa. From which right he is speaking in the name of Lebanon? What is the link of the fuel with the border at the North? If he fires rockets on Israel, they will give us back the fuel they are intending to steal??
No logic, no plan. Just a puppet which job is to make agressive discours and plans to destroy the country.

Someone needs to do a study of what the electricity budget defecit has been in Lebanon since the Shia have not paid, and calculate the interest paid on the money borrowed. The Shia like Berri are putting Lebanon in debt to Zionist bankers. Are they in business with them?

So in your "realpolitik" of a world neither diplomacy nor international laws apply?
Based on your logic, negotiations are only functional when your puppets are running the judiciary.

Look at the photo: We don't even pay for this much electricity. That is why the country needs to borrow.