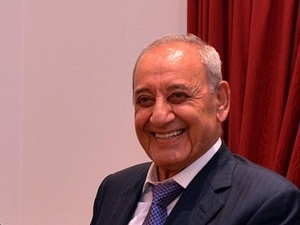 Speaker Nabih Berri has expressed regret that the parliament will once again Wednesday fail to elect a new president despite the “positive signs” that had emerged on the crisis.

Parliament is scheduled to convene to elect a successor to President Michel Suleiman whose six-year term ended in May.

The rival MPs have failed in more than a dozen rounds to choose a new head of state over their differences on a compromise candidate.

Berri has been lately claiming that there were “positive signs” on the presidential deadlock. But the speaker told his visitors that Wednesday's session is expected to meet the fate of its predecessors.

“There are no practical developments” on the issue, he said.

However, he expressed relief at the meetings of a committee assigned with finding a compromise on an electoral draft-law.

Berri has given the committee, which comprises lawmakers from all blocs, a one-month deadline to agree on a hybrid draft-law that combines the winner-takes-all and proportional representation systems.

If the MPs fail to reach agreement, then the speaker will call for parliamentary sessions to discuss all proposed electoral draft-laws.

Berri has said that the electoral law must adhere to the Taef Agreement by adopting the governorate as an electoral district and should also have a fixed female quota.

The committee is expected to hold its second meeting within days. It is waiting for the return of one of its members, MP Marwan Hamadeh, who is at The Hague to testify at the Special Tribunal for Lebanon in ex-PM Rafik Hariri's Feb. 2005 assassination.

As Safir daily quoted political sources as saying that the committee is not expected to reach an agreement within a month because each bloc is holding onto its own proposal, which serves its own interests.

But Berri told his visitors that the committee members should exert all efforts to reach an agreement on the hybrid draft-law, which receives a large-scale support.

He warned that “the stage of voting at the parliament will not be easy” if parliamentary sessions are held to discuss the proposed draft-laws.

What are these positive signs you've been referring to for the last week? Let me take a guess: everyone agrees that they need to elect a president?

Head of parliament is able to renew members but unable to force them to elect a president or find a solution? What a failure punk he is.