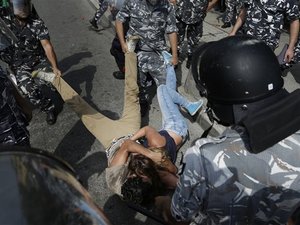 Lebanon's rival leaders met for the second round of national dialogue on Wednesday as scores of civil society activists clashed with security forces during a demonstration aimed at shaming the officials for failing to resolve crucial issues.

The all-party talks were chaired by Speaker Nabih Berri at the parliament for the second week in a row as “You Stink” movement activists staged a protest to coincide with the dialogue in downtown Beirut.

They clashed with baton-wielding anti-riot police after trying to push the metal barriers that security forces have erected to close off Nejmeh Square where parliament is located. Dozens of protesters were arrested during the confrontation before being released in the afternoon and evening.

Video footage showed police dragging at least two protesters on the ground while violently beating them both.

The protesters accused the Internal Security Forces of using force and assaulting them, but police stressed said it respects the people's freedom of expression and peaceful demonstration rights.

Later, anti-riot police chased protesters who had blocked the road near the Environment Ministry. The road closure came after several hunger strikers, who had erected tents in the area, were arrested during the clash with security forces.

Later in the day, young men claiming to be supporters of Berri attacked protesters at the camp and destroyed their tents over alleged insults against the parliament speaker.

Riot police intervened after a second attack was waged and at least one of the assailants was arrested.

TV footage showed the attackers hurling chairs and rocks at the protesters of whom several were injured.

The developments prompted protest organizers to call for an open-ended sit-in at the Riad al-Solh Square that started at 6:00 pm. The sit-in moved to the hunger strike camp near the Environment Ministry after all detainees were freed in the evening.

"Today we proved that we don't fear repression or intimidation and we will continue our battle until we achieve our demands," the activist Arabi al-Endari announced at Riad al-Solh in the name of the protest movement.

Earlier, a peaceful demonstration was held near Martyrs Square by the relatives of the servicemen taken hostage by jihadists in August last year when they overran the northeastern border town of Arsal.

A family member shouted: "Our cause is more important than all other issues."

"We want our cause to be discussed at the dialogue table," said another. "Let them stop lying to us that our sons will be released."

The dialogue session ended around 4:00 pm and several participants described the atmosphere as positive.

“The conferees discussed means to reach a breakthrough in the issue of the presidential election and other topics,” said an official statement issued after the session.

“They stressed their support for the government in the implementation of the decisions that were taken to address the vital issues and it was decided to hold the next session on Tuesday, September 22 at 12:00 pm,” it added.

For his part, Deputy Speaker Farid Makari said “it is impossible to amend the Constitution in order to elect a president by a popular vote.”

MTV, meanwhile, said Change and Reform bloc leader MP Michel Aoun told Berri that “the Free Patriotic Movement's participation in today's dialogue session might be the last if the conferees do not endorse the proposal of 'resorting to the people.'”

Last Wednesday, anti-government protesters gathered near the parliament building, which was closed off by security forces, and hurled eggs as politicians' convoys drove by.

Later in the day, thousands of demonstrators braved a sandstorm to take to downtown Beirut's streets and rally against government dysfunction.

The trash crisis has ignited the largest Lebanese protests in years and has emerged as a festering symbol of the government's paralysis and failure to provide basic services. It was sparked by popular anger over the heaps of trash accumulating in the streets of Beirut and Mount Lebanon after authorities closed Lebanon's largest landfill in Naameh on July 17 and failed to provide an alternative.

Berri said in his opening statement on Wednesday that only dialogue would lead to salvation.

The national dialogue has on its agenda the presidential vacuum, the resumption of the work of parliament and the cabinet, a new electoral draft-law, legislation allowing Lebanese expats to obtain the nationality, administrative decentralization and ways to support the Lebanese Army and the Internal Security Forces.

It was attended by the same officials who took part in the talks last week, except for Change and Reform bloc leader MP Michel Aoun, who sent Foreign Minister Jebran Bassil as his representative.

The country has been without a president for over a year, and lawmakers have illegally extended their term twice amid disputes over the election law.

After meeting for three and a half hours last week, the leaders of various parliamentary blocs issued a brief statement, saying the talks would resume in a week.

I wonder why,the voters keep on voting for, and supporting the same people...

Ft, mowaten, surfin.bird, Markus, and I are the 5 most informative and liked posters on naharnet by 5 country miles. No wonder our posts are always in the VIP section of the top rated comments. No wonder...

Kazan, you're perfectly right and I would add that for as long as the people keep voting for them, the rot will only grow.

no one voted for these people, the appointed themself jobs two years ago!

WillyPete (Guest)
please use your own screen name.

They are so scared of the protesters that they are using disproportionate force against them. There will be no peace until the whole mafia is down and out, both M14 and M8. It's been 10 years now, what have they solved other than being at each others throats? Nothing seems to faze them, not even the impending disaster looming over the rain clouds. They care less, cholera or any other form of sicknesses that will afflict the people, all they are after is power and power. If the people don't revolt, then Lebanon is doomed.

Later in the day, young men claiming to be supporters of Berri attacked protesters at the camp and destroyed their tents over alleged insults against the parliament speaker.

Riot police intervened after a second attack was waged and at least one of the assailants was arrested.

TV footage showed the attackers hurling chairs and rocks at the protesters of whom several were injured.

5 minutes ago AMAL Movement: We urge everyone to maintain calm and not to be dragged to strife, although the AMAL Movement had nothing to do with the latest events.

The problem, of course, is that the same people participate in this "National Dialogue" as who created the crisis in government that caused this dialogue to come about. They are all arsonists first and firemen second. They are the cause of the problem trying to effect a solution to the problems they caused. Of course the reasons which motivated them to create the crisis persist and therefore they are not proper agents to fashion any sort of solution. They are not motivated to create solutions, only to persist in creating crises.

I can not believe that some love a politician so much that they would hurt another person. How stupid can you be. To be a politician is to be a criminal in Lebanon. People don't trust these war lords they will throw rock at you even as you try to defend them. Your future and lebanons future should not be in their hands. Cut all their hands off, M8 and 14. Start fresh and clean. This country needs a fresh start. The politicians only care about themselves. Really in 2015 we still don't have electricity all day. Come every body wake up. They all suck stink and hate us all!!!!

Who is ordering the police to act disproportionately? Is it the minister of the interior, or the leader of a well known militia? All in all, the protesters are facing many enemies in power and in power illegally. It has started with the trash issue, but it will end with a much bigger issue.

Typical Lebanese behaviour, democracy in that part of the world is like the other countries around it.

Your Constitution is the problem. The Taif Agreement also. Unfortunately you will have to force these bums out. They are like Abbbas in the West Bank and depend on foreign benefactors to stay in power. They use the Constitution to justify the paralysis of the state after extending their rule illegally while at the same time they say new elections are impossible. When you boil the water out of the pan, even if you think Aoun is corrupt and a horrible man, what he is proposing is the only way forward at this point or else you will face Civil War. The Hezbollah / al Mustaqbal dialogue is the only thing preventing the dissolution of your state and it serves their own interests and keeps them from shooting at each other. Meanwhile the status quo remains and here comes winter. You , the People, will have to put fear in Parliamentarians until they realize that if they don't allow elections they will be punished in the street. And then sent to prison. Hard time.

JCW, one more good post from you, but about the civil war it won't happen, the money and the resources are not made available to the Lebanese, and this is something I can assure you of. Then Aoun doesn't have the right proposal, all he is after is as usual, just himself and no one else. I know this for sure, he will go to his grave all alone, and sooner than we know.

I agree that lots of our polititians are rot, corrupted, etc... Also you can find some who are devoted to serve their country, who are clean hands (either talking of blood stained or money stolen).
By the same talking people are deeply divided in politics. Among people demonstrating you can find the honest and the criminal or violent. You can find the good intention ones looking for a better life and the thugs serving their parties.
Just imagine if dialogue stops leaving people to find solutions! I bet that the winners will be the thugs serving their parties and the criminal and violent persons. The peaceful ones no matter how good their intention is will flee away and if they can overseas.
It is better to leave these polititians find some provisional solutions and make them accountable in the next elections as I am sure that the majority of people will be losers in the CHAOS but winners in the elections. If I cannot fight my oppressor I wait patiently to stab him when I can.