Berri: How was Cabinet's 'No Decision' Interpreted as Abstention? 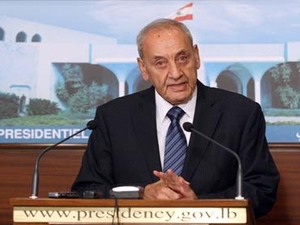 Speaker Nabih Berri slammed the Lebanese government's "no decision" on U.N. Security Council sanctions against Iran, saying Lebanon should have voted against the draft resolution.

"I still insist on my position that I announced at Baabda palace that Lebanon should have voted against sanctions on Iran, which is a friendly country that has stood next to Lebanon," Berri told An Nahar daily in remarks published Thursday.

"The voting of the ministers was similar to a no decision," he said. "I wonder why it turned out to be an abstention" at the Security Council.

He praised Turkey and Brazil for voting against the sanctions, saying "once against Turkey proved that it is a strong and friendly country that respects its choices."

Following talks with President Michel Suleiman in Baabda on Wednesday, Berri said not voting like turkey was tantamount to supporting Israel.