Berri, Jumblat Push for 30-Member Cabinet to Include all Parties 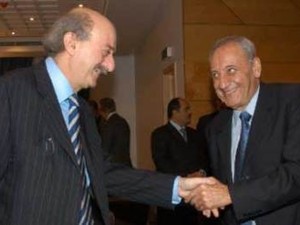 The formation of a 24-member cabinet is disapproved by the Hizbullah, AMAL and the Progressive Socialist parties because they prefer to have bigger shares in the new cabinet and to include all political parties, An Nahar daily reported Thursday.

AMAL Movement leader Speaker Nabih Berri dispatched his political aid and Finance Minister Ali Hassan Khalil to Prime Minister-designate Saad Hariri a day earlier, asking him to widen the cabinet into 30 members in order for the Shiite parties to get five ministerial portfolios instead of four that include the finance, agriculture, economy for the AMAL and the industry and youth and sports for Hizbullah, according to the daily.

Hizbullah and Berri want to broaden their participation so it would include MP Talal Arslan, Asaad Hardan of the Syrian Social National Party and the Kataeb party.

For his part, PSP leader MP Walid Jumblat voiced calls on Wednesday to form a cabinet of 30 ministers with a balanced share for the Marada Movement and the Lebanese Forces.

this picture says it all,, bunch of crooks