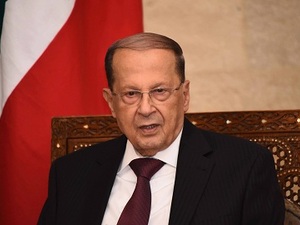 President Michel Aoun discussed with Speaker Nabih Berri and Prime Minister Saad Hariri the latest development after the Israeli airstrikes on Syria, the Lebanese Presidency said in a tweet on Saturday.

Aoun consulted with Berri and Hariri on the developments and received reports from Defense Minister Yaacoub al-Sarraf and the Army Commander Gen. Jospeh Aoun, said the tweet.

Syria state media its air defenses repelled an Israeli raid on a military base in the center of the country on Saturday, hitting more than one warplane.

The report came after the Israeli military said one of its fighter jets had crashed during strikes against "Iranian targets" in Syria after intercepting a drone.

Remnants of the strikes were found in Lebanon's Hasbani valley and the Bekaa village of Sarin.

Israel has carried out dozens of air strikes on the Syrian armed forces and their allies since the civil war broke out in 2011.

Iran with Russia is the main military backer of the Damascus government.

Israel has largely confined its operations to targeting Hizbullah, the Lebanese group that is a key ally of Iran.

i hope they did not mobilize the air force and navy in response.

Well I heard all the Kizballah air-force bases are on high alert. The pilot although not feeling to well showed up this morning readying his bi-plane Sopwith Camel Mrk V to decimate the IDF. Lets hope his battery is all charged up!

Loooooooool Kizb would not dare fire a "fitayshi" right now. Leave the thousands or Rockets rhetoric to the bearded goat's upcoming sermon of how he will defeat the world.

You mean the usual high alert strict instructions of dont even peep so that you dont upset Israel? Yup we know how brave Kizballah are and how they get quieter than a church mouse after they have been slapped by Israel. No doubt come monday the bearded goat will scream out his venom of how he plans to answer this heinous act on a different day.....

They don't do more like what all of us do here on naharnet comments : they discuss as spectators and nothing happens following their discussion