Berri Lashes Out at Hariri after Libya Remarks 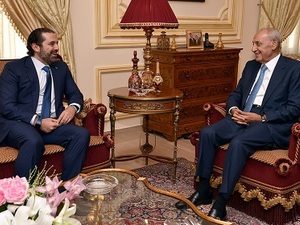 Speaker Nabih Berri replied to Prime Minister-designate Saad Hariri’s remarks about Libya’s absence from the Beirut summit, saying the “major harm was done to Lebanon forty years ago,” in reference to the disappearance of Shiite cleric Imam Moussa al-Sadr which is blamed on Libya.

In remarks he made at the Arab Private Sector Forum, Hariri expressed regret for the absence of the Libyan delegation from the summit expected in the weekend, affirming that good ties with “Arab brothers” must prevail.

Berri's press office later issued a statement commenting on Hariri's remarks that the “rapprochement” between his al-Mustaqbal Movement and the Free Patriotic Movement “has driven a lot of people mad.”

“This claim is totally baseless, and quite to the contrary, it is in the interest of Lebanon and all Lebanese to witness rapprochement between all Lebanese political forces and movements,” the statement added.

“But when we sense that this rapprochement is at our expense and at the expense of our rights and sacred causes, such as Imam al-Sadr's cause, ... our young men will perform their duty and they will not await an alliance or an understanding with anyone, no matter how superior or inferior their position might be,” Berri's statement said.

Berri also accused Hariri and the FPM of a “blatant attack on our sentiments and on the sentiments of all those who cherish Imam al-Sadr through insistence on inviting the Libyan regime which is totally not cooperating in this case.”

Libya had on Monday officially decided to boycott the summit, a day after AMAL Movement supporters removed Libyan flags and addressed insults to Libya near the summit's venue.

The summit that Lebanon is hosting this weekend has been marred by controversy days before delegates arrive.

Last week a debate erupted over whether Libya should be invited in a dispute that stems from the 1978 disappearance of Imam Moussa al-Sadr, the founder of the AMAL Movement now headed by Berri.

The cleric vanished on an official visit to the country when it was ruled by Moammar Gadhafi. The issue remains a longstanding sore point between the two countries, even though Gadhafi was overthrown and killed in 2011.

Yeah, keep lashing at each other while the economy collapses. More than 3,000 businesses have closed down or into liquidation and unemployment has reached 40%.

Good to see you again!

They don’t care about the economy. I recall that 10 years ago, Berri’s Amal thugs camped for 2 straight years in downtown Beirut, which in turn caused many bankruptcies. My cousin was renting a shop there and had to close down. Do you remember how many restaurants there were and Arab tourists flowing in from all over the gulf, it’s all gone.

like they care what is happening to Lebanon and the Lebanese...

They dont care about anyone but the well being of themselves and handing over the keys to the business to their siblings. The Imam is just an excuse.

Looks like this year will be rg final nail in the coffin of what once the Republic of Lebanon. The country has completely collapsed institution wise, only a matter of time before it collapses economically.

The poor imam has been martyred again lol. As long as there are fools to follow the umpteen Gods Lebanon has Imams will be used and abused to control the masses. Berry is using this pretext to assimilate the Imams death with a nation tragedy. If thats the case Berry the other Imams and Priests who have died taking care of their flocks either do not count or should also be considered as "devine" as the Imam moo? Its not about the Imam or Libya or KSA here its all about using all of the above as a means to take advantage of the mentality inhibited people who keep them in power. Religion like the Imam will sadly be bought and sold in the market daily in Lebanon the land of the Gods....

You are good to unleash your thugs to take and burn down flags, but you are not good at calling a parlement session to provide names of your Shia ministers?