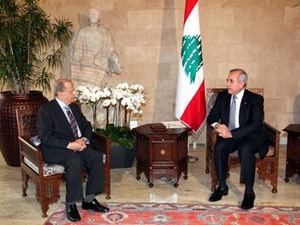 The deadlock on judicial appointments hasn’t been solved yet as President Michel Suleiman and Free Patriotic Movement leader Michel Aoun continue to hold onto their own candidates for the post of the head of the Higher Judicial Council.

An Nahar daily quoted Suleiman’s visitors as saying on Friday that the appointments should not be in a state of stalemate under any excuse. “Differences of opinion should not prevent the process of necessary appointments in the state.”

Suleiman is supporting Judge Alice Shabtini, who now heads the Military Appeals Court, to the post for her seniority and for “having a clean file.” But Aoun is backing Judge Tanios Meshleb to give him enough time to make achievements given that Shabtini has a limited time before she retires.

Suleiman’s visitors said that unlike claims that Shabtini has only one year of service left, she still has two years and two months.

Justice Minister Shakib Qortbawi, who is loyal to Aoun, told Voice of Lebanon radio station (93.3) that a cabinet policy for each minister to name three candidates to a certain post does not apply to the judiciary.

Part of a solution to the judicial appointments comes through steering them clear of political disputes and the media, he said.

“There are several people who meet the standards,” Qortbawi added.

Meanwhile, Speaker Nabih Berri continued to push for the appointment of the members of the Oil Regulatory Authority. He told An Nahar that the deadlock on the appointments should be solved.

“Each minister should carry out his responsibilities in this regard,” he said, adding that Minister of State for Administrative Reform Mohammed Fneish should speed up the naming of candidates “or else I will have another answer in that regard.”

According to An Nahar, the diplomatic appointments would be at the top of the cabinet’s agenda next week.

why dont they just flip a coin?

General Aoun you make us proud to be Lebanese, keep on the great work God Bless you...

@cookie
Actually, you made the honors for the 1st brainless comment. Congrats! ;-) ... well sophia's not bad either!