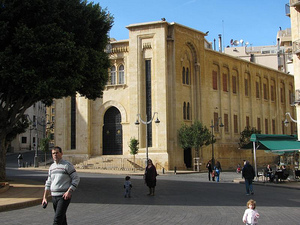 Al-Mustaqbal bloc MP Jamal al-Jarrah said he would meet with Speaker Nabih Berri on Saturday to inform him that he should be “punished” if the Syrian accusations against him turned out to be right.

“The reputation of the parliament and consequently the reputation of one of the lawmakers and his constitutional and legal rights are being raised,” al-Jarrah told An Nahar daily.

“If the Syrian accusations against me were proven to be right, then I should be punished. But if they were proven wrong, then the parliament which I am a member of should safeguard my reputation,” he said.

Syrian state television on Wednesday aired "testimonies" of three people saying they had received funds and weapons from al-Jarrah to fuel a wave of protests against the ruling Baath regime.

The alleged leader of the network Anas al-Kanj said in his testimony that the arms were sent by Jarrah through an intermediary, Ahmad al-Uda, who identified himself as a member of Syria's banned Muslim Brotherhood.

“Does he really exist?” Jarrah asked about al-Uda, saying “couldn’t he be an Israeli agent?”

In remarks to Voice of Lebanon radio station (100.5), al-Jarrah defied Syrian authorities, saying he challenged them to submit a file to the Lebanese judiciary that includes anything other than the fake testimony of the cell.

The allegations came amid the eruption of a war of words between Syria and Hizbullah from one side and Caretaker Premier Saad Hariri’s al-Mustaqbal movement and the March 14 forces on the other.

Syria’s ambassador to Lebanon Ali Abdul Karim Ali reiterated Friday that Lebanese authorities should take action on the issue. He was speaking at the embassy headquarters in Hamra on the occasion of the 65th anniversary of the end of French mandate.

Meanwhile, President Michel Suleiman told the secretary-general of the Higher Lebanese-Syrian Council, Nasri Khoury, to coordinate between the involved institutions of both countries for a judicial cooperation on the issue.

How could we believe people who have been fabricating such stories for the last 30 years?
The brother of the person who testified on Syrian TV, just appeared and said that his brother is a junky and he has been in prison for the last few years.
How could he have met or received arms from Jarrah?
They did not even have time to fabricate the story properly :)