Report: March 14 to Boycott Parliamentary Session for Armenian President, Another on Gaza 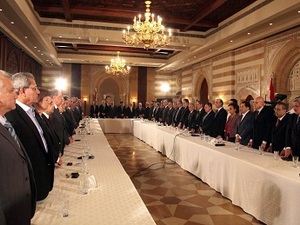 The March 14 opposition decided on Tuesday to boycott the parliamentary session that Speaker Nabih Berri called for on November 27 to hear a speech by Armenian President Serzh Sargsyan.

“We will not attend the two legislative session that Berri called for to welcome the Armenian president and to show solidarity with the Palestinian people” against the Israeli aggression on the Gaza Strip, high-ranking sources in the opposition said in comments published in An Nahar newspaper.

The sources said that the March 14 alliance is preparing for “a series of activities to express support to Gaza.”

They also said that a delegation from the opposition will hold talks with Sargysyan to stress the friendship and ties of cooperation between Lebanon and Armenia.

On Monday, Berri lashed out at the opposition after it accused him of seeking to push it into the “trap” of attending parliamentary sessions despite vows by the coalition to boycott legislative activity.

The alliance boycotted all parliamentary activity following the October 19 assassination of the Internal Security Forces Intelligence Bureau chief, Wissam al-Hasan, in a car bomb explosion in Beirut's Ashrafiyeh district after it blamed the government of covering up the killing.

The March 14 coalition said that the invitation to the November 27 session and plans for another session to show solidarity with the Palestinian people against the Israeli aggression on Gaza are seen as attempts by Berri to "corner" the opposition and end its boycott of the parliament.

berry your efforts will fail.

He's a big corrupt failure, hence anything he undertakes will fail.

March 14th is right, it really is a trap, they are handling it well. berri is being weird, it's like he just wants a show of unity and not really unity.

They seem to have been effective in protecting M8 leadership. Either that or Syria is not killing them because if it did then Logic and Common Sense will cause people to suspect Israel of doing it and hence cause Israel problems (something friends do not do to friends). This post of mine is somewhat convoluted, hope you were able to follow its meaning.

No negotiation with a Hizbala and the snake Berri controlled government...I do respect our president and I think that he's trying his best to protect our country but he didn't stop or couldn’t stop the hostile taking over our government by Hizbala with intimidation and back stabbing...enough is enough...

isnt that what their job is as a resistance? to protect lebanon? then why have all these weapons, intelligence dpt.. illegal communication networks??
again... they either did it.. did not do it but turned a blind eye.. or they are incompetent and dont need the intelligence branch so we can go ahead and dismantle that.

no that is not a good example and if you think so i am debating with someone not worth my time... what exactly is the accountability of HA?? why do they have all these privileges when they are for naught? have they EVER used their intel to stop an assassination of an m14 figure? i mean really ALL those assassinations and they have no idea?????

M14 MPs are paid to be at parliament. They can agree or disagree with Berry. But you show up to parliament like they do in civilized democracies.

independent, why your double standards? did you forget that Berri and M8 COMPLETELY closed parliament for how long? almost 2 years?

lol! berri closed the parliament and M8 blocked it... forgot that? you should be happy that M14 is using the example you have set!

concerning the expat law you d better educate yourself and see who did what and you ll stop saying M14 didn t do a thing concerning it...
get your facts straight before saying M8 populist stupidities...

FT, why am I spiteful and vengeful? when all I did is state the fact!!! didn't the M8 MPs get paid while parliament was closed??? Sure they did...So berri the Mafioso is right when it suits you and not when it doesn't!!! Listen dude we should do what it suits Lebanon NOT your Berri, Nousrala, Aoun and the rest...Lebanon First...keep that in mind and we’ll be okay.

Another example of useless leadership on both sides of this nut house.