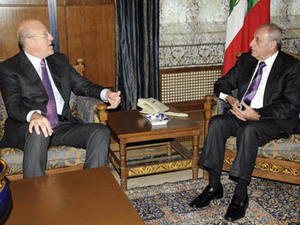 Speaker Nabih Berri has admonished Prime Minister Najib Miqati during a telephone conversation on his alleged support for the 1960 electoral law that is based on a winner-takes-all system, As Safir daily reported on Wednesday.

During their conversation on Tuesday night, Berri asked Miqati whether he is supporting the 1960 law and has backed off from a government draft-law referred to the parliament last summer that calls for dividing Lebanon into 13 districts based on a proportional representation system.

Berri reiterated that he holds onto a hybrid draft-law that combines the winner-takes-all and proportional representation systems that has been proposed by MP Ali Bazzi from his Liberation and Development bloc.

The proposal calls for 50 percent of the seats be based on the majority system and the other half on the proportional system.

The speaker stressed that the proposal has been studied well by his bloc.

Berri said in response to a question that he backs the return of al-Mustaqbal movement leader ex-PM Saad Hariri to Lebanon to agree with him on several issues.

“Agreement on an electoral law could be a starting point for discussions to find more common ground” on other controversial issues, he told As Safir.

He added that he has a clear “strategy to consolidate the logic of moderation and openness.”