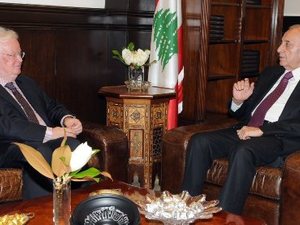 U.N. Special Coordinator for Lebanon Michael Williams welcomed on Tuesday the “positive role” played by Speaker Nabih Berri in the formation of the government.

He was referring to Berri’s decision to give up a Shiite seat in favor of Sunnis to facilitate the cabinet formation.

“Lebanon now has the opportunity to address many challenges, for example social and economic challenges, that affect the Lebanese people,” he said.

Williams expressed his concern over the deadly clashes in the northern port city of Tripoli last Friday and recalled “that it is now three months since the Estonian cyclists were abducted.”

“This situation cannot continue. I expressed the hope that the Lebanese authorities would be able to prevent a recurrence of such incidents, which threaten the stability and security of the country,” he said.

Williams added that he agreed with Berri on the need to fully implement Security Council Resolution 1701.

"Ouch!" cried March 14. "Another nail in our coffin." they screamed.