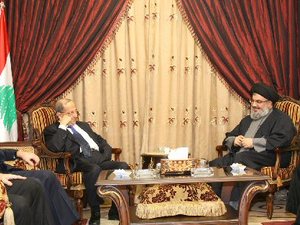 Free Patriotic Movement leader Michel Aoun has denied that he had differences with Hizbullah and confirmed that he had lately held talks with the party leader, Sayyed Hassan Nasrallah.

“We haven't disagreed,” Aoun told An Nahar newspaper published on Sunday. “There were some thorny issues linked to internal affairs … that we resolved.”

But the FPM chief stressed that the disagreement on those issues was not with Hizbullah, a veiled reference to the party's ally, Speaker Nabih Berri, who is also the head of the Amal movement.

Asked about the differences with Berri, Aoun said: “The tension has disappeared.”

“It is natural to have different point of views between lawmakers and the speaker,” said Aoun, who is the head of the Change and Reform parliamentary bloc.

He reiterated that he had “friendly ties and a common stance” with Hizbullah, saying “we support the resistance as long as Israel continues to threaten us daily.”

Aoun also confirmed that he had lately met with Nasrallah. “We met and spoke about the situation in general,” he said.

“It is our right to hold bilateral talks and not to reveal our political plans,” Aoun added.

The head of the Change and Reform bloc also defended Hizbullah's fighting in Syria.

“The Lebanese situation and the vacuum on the Lebanese border compelled (Hizbullah's) intervention in al-Qusayr,” he said.

Hizbullah was instrumental in helping secure a Syrian regime victory in the strategic town of Qusayr near the border with Lebanon last month. The move was widely condemned by the international community and Lebanon's March 14 alliance that backs the rebels fighting Syrian President Bashar Assad.

“The armed operations (launched) from Lebanese territories on Syria had almost caused civil war,” Aoun said, adding Hizbullah's intervention in Qusayr “was necessary for such a war not to take place.”

But when asked that his son-in-law Caretaker Energy Minister Jebran Bassil had lately criticized the meddling, Aoun said: “We are against intervention in general.”

“But the security situation compels politicians to interfere,” he added.

What differences? Nasrallah tells you what to do and you do it, the rest is all a show.

hello:) we have a new rebel without signature:)))

Hello RFT... yes the wolf-man has morphed once again, I wonder how long it will take him to sprout wings in his latest form?

hehehe:) he is a rebellious mutant spirited freemind to say the least:)

“The armed operations (launched) from Lebanese territories on Syria had almost caused civil war,” Aoun said, adding Hizbullah's intervention in Qusayr “was necessary for such a war not to take place.”
Once again Aoun shows his wisdom, poise, and grasp in analyzing current events. Yes, there were over 239,459 terrorists amassing at the lebanese border waiting to invade had it not been for HA (Hussain Army) intervention and "ethnically cleansing" Qusayr. Since its inception in August of 1988 Al Qaida, its affiliates, and off-shoots have been carrying out terror operations in Lebanon and we reached a stage where such actions could no longer be tolerated. These syrian rebels almost conquered 99.99% of Syria and felt they had the upper-hand in Syria. Their unfounded optimism gave reason to ideas of invading lebanon. God Bless our Islamic Secular Resistance aka HA (Hussain Army) and Aoun for foiling those attempts.

They are very Brave warriors, one runs away and the other one hides underground :-)

Why the gigantic cushion in the middle of a coffee table you Neantherdal twat, iranian style I guess.

HA retracted his red-line -put for the safety of refugees/civilians there- when it was reported these same people were helping the extremists and gave his blessings to the army to strike them down.

Who killed the anti-Syria or M8 Lebanese figures? Once this is resolved and the devil is identified worldwide then peace will see the light.
We oppose intervention in general But it's ok for al-quasar to happen.